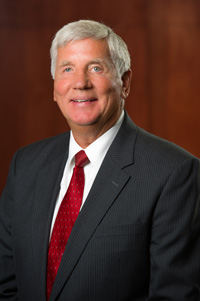 Bill Feuerborn of Garnett was appointed to the Kansas Board of Regents by Governor Sam Brownback in 2014.  He has been developing small businesses in Anderson and Coffey counties for forty years, and has been engaged in farming and ranching since 1973.

Feuerborn was born in Garnett, and is a graduate of Garnett High School. He served as a State Representative for the 5th District for 18 years, where he was the ranking democrat on the House Appropriations Committee from 2006-2012, having served on that committee from 1998-2012.  For the past 40 years, he has been a member of the Garnett Optimist Club, is a past president of the Anderson County School Board, and is a member of the Kansas Livestock Association.

Feuerborn received his associate degree from Independence Community College in 1968 and a bachelor's degree from Pittsburg State University. He and his wife, Lynda, have three children and seven grandchildren.  After playing in both high school and college, Feuerborn refereed high school and college basketball for over twenty years, but now simply enjoys watching the game.